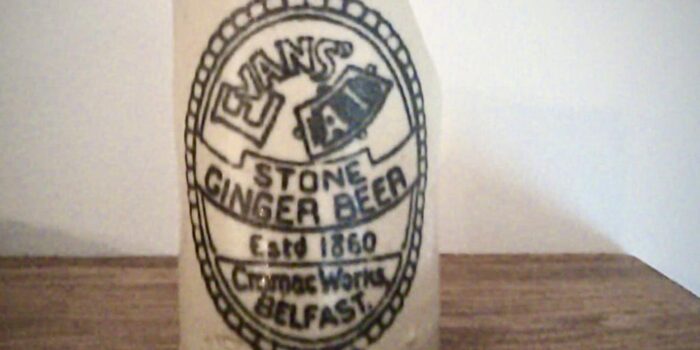 Some contaminated land sites can be more interesting than others… this bottle fragment was previously uncovered by OSM Senior Hydrogeologist, Peter McConvey, at a site in Belfast.

This unearthed bottle harkens back to when Belfast had a bustling industry centred around its unique hydrogeology, producing bottled aerated waters, ginger ale and medicinal waters which were shipped around the world from Belfast Harbour. Some claim ginger ale was created in Belfast, with Grattan and Co, based on Great Victoria Street, being one of the main developers and producers.

Belfast’s natural hydrogeology lent itself to the production of these drinks and soon several companies became world famous. The factories which produced these products relied on groundwater pumped from boreholes, abstracting groundwater from the Sherwood Sandstone aquifer beneath the Lagan and Enler valleys around Belfast. Northern Ireland and ginger ale were synonymous well into the early 1900s, with prohibition era America being a particular time of success for the industry.

For OSM Senior Hydrogeologist, Peter McConvey, unearthing the bottle was of special interest as he has previously spoken to the Belfast Geologists’ Society about Belfast’s history of ‘Geology, Jobs and Ginger Ale’.

Although Belfast no longer has such a booming aerated drinks industry, local businesses today still use the same resources for a clean supply of water. Recent innovations have led to increasing interest in the value of groundwater.

As it is found at a constant temperature of ~11-12oC, it can be sustainably used for passive cooling and/or active heating and cooling combined with a heat pump, leading to major carbon savings compared with other technologies.

If you have high water demand and are looking to reduce costs and/or are seeking ground source low carbon solutions for heating or cooling needs anywhere in Northern Ireland, contact our OSM Senior Hydrogeologist Peter McConvey directly to explore your options.

"We were referred to OSM by a fellow…